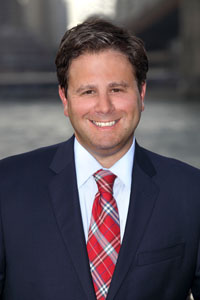 He received his undergraduate degree from Albany University in 1995 and later went on to earn his Juris Doctorate degree from Brooklyn Law School in 1998. He has been practicing law since 1999 and became a partner at the firm in 2007. He is the current President of the  New York Trial Lawyers Association (NYSTLA). He is also the Co-Chair of the NYSTLA Workers' Compensation Committee and a member of the Legislative Committee, No-Fault Committee and Labor Law Committee.  Since 1999, he has written for the NYSTLA Decisions program. He has lectured at the Decisions program for the past two years on the topic of Workers' Compensation.

Matthew serves on the Executive Board of the Injured Workers Bar Association, participating in online round table discussions regarding the rights of injured workers. He is a Workers Compensation Committee member of the New York Coalition for Occupational Safety and Health (NYCOSH). Matthew regularly lectures on the workers compensation law to various labor organizations. Currently, he is actively engaged in extensive workers compensation litigation.

In 2017, Matthew was honored with a City & State Corporate Social Responsibility Award in the Law sector.