A new study by Zippia reveals hospitals are the most dangerous worksites for New York employees. New York was also ranked 40th overall in most dangerous states to work in.

Employees have a right to expect a reasonably safe workplace under New York law. The New York Workers' Compensation Code makes specific provisions for safety in the workplace. Employers which do not follow these laws are subject to regulatory penalties (such as suspension of a business license), fines, civil lawsuits and even criminal charges. 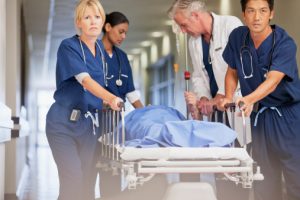 Hospital workers face a myriad of potential hazards while carrying out their daily duties, including:

According to the Occupational Safety and Health Administration (OSHA), hospitals have reduced worker injuries over the last several decades, but not as effectively as other industries.

The Zippia study identified and weighed several factors to identify the "most dangerous" states and industries. First, it examined OSHA's injury reports, and divided each state's total reports by the number of workers employed in that state. Next, fatality rates reported by the Bureau of Labor Statistics were weighed as a separate factor in the analysis of dangerousness. Finally, data from the Insurance Institute for Highway Safety was broken down to determine the number of injuries in each state per mile driven.

Injury statistics are more than just numbers. Real employees' lives can be devastated by the effects of workplace injuries. Consider the example of a Philadelphia nurse who damaged a disc in her back while assisting to move a patient. NPR reports she required surgery to install a metal cage and four long, sharp screws in her back. "The career I had as a floor nurse is over," the injured nurse lamented. NPR also reports nurses and nursing assistants suffer back and musculoskeletal injuries at a rate approximately three times greater than construction laborers.

Violence in the workplace is another very real danger faced by healthcare professionals.

CNN reports on a series of troubling violent incidents in hospitals, including: a Baltimore doctor who was shot and critically injured by a gunman; a man in Valley Stream, New York who broke a chair and used the legs to beat a nurse; a gunman who opened fire in a Laurinburg, North Carolina hospital after a bar fight; and a man who killed two hospital employees in a Columbus, Georgia hospital after being dissatisfied with his mother's care. CNN interviewed one emergency nurse who reported that she had been scratched, bitten, spat upon, and struck hard enough to break her jaw. The assailant later apologized, saying that he was "tired of waiting".

And here in New York City, a disgruntled former employee opened fire in a Bronx hospital before killing a female doctor and turning the gun on himself. According to CNN, Dr. Henry Bello had recently resigned from the hospital shortly before he was set to be fired. He returned to the hospital and opened fire. He killed a female doctor before turning the gun on himself, and critically injured six others in the attack.

Hospital employees must exercise constant vigilance in the exercise of their work duties. Stay alert for unusual activity, and be prepared with a backup plan in the event of violence.

If you or a loved one has been injured on the job, contact a New York City workers' compensation attorney as soon as possible. You have legal rights which must be protected.