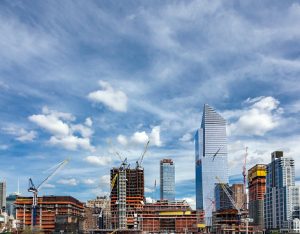 On a historic Manhattan street located approximately 10 blocks to the north of the World Trade Center, a 565-foot long crane came tumbling down during Friday morning commute hours recently. One pedestrian was killed by the crane, which had collapsed. A row of parked vehicles was also crushed when the crane collapsed.

In this particular case, it was a pedestrian who died. Crane collapses, unfortunately, often cause workplace injuries to people on construction sites. Workers and every other pedestrian and individual on the roads of New York need to be aware of the dangers of cranes. The risks are so grave that New York City actually immediately began implementing new safety procedures in the aftermath of the deadly accident which led to a 38-year-old pedestrian dying.

The investigation into why the crane collapsed recently is expected to take weeks to be resolved. The Department of Buildings had actually visited the worksite the morning before the deadly accident and found the worksite to be "in proper order," according to Insurance Claims Journal.  The New York Police Department and the Department of Buildings are both looking into how the crane collapsed. A forensic investigation is also underway, with the crane itself being studied to determine if there are clues on how the incident occurred.

As the investigation unfolds to determine how the accident happened, Mayor Bill de Blasio is also taking steps to make sure future similar tragedies do not occur. For example, after the crane collapsed on the fateful day, NYC officially ordered all 376 crawler cranes which were in the area to be secured due to wind gusts.  Crawler cranes are just like standard cranes in many ways; however, crawler cranes do not have wheels to move. Instead, crawler cranes resemble tanks in how they get around because they have tracks instead of wheels.

Other new safety policies include more restrictions on where crawler cranes should be used; new notification procedures to make sure neighbors are aware when a crane will be used; and the establishment of a new task force specifically intended to help assess current safety standards and suggest remove for improvement.

Because wind conditions are so dangerous, new restrictions on crawler cranes also will demand an end to operations and a switch into safety mode any time steady winds are forecasted to exceed 20 miles per hour or whenever the forecast indicates gusts will exceed 30 MPH.

Mayor de Blasio has indicated when wind conditions warrant the use of secure modes for canes, engineers will be sent out to certify the cranes have stopped operating. Without certification, penalties of $10,000 could be assessed. The $10,000 penalty is a significant increase, as the current base penalty for a violation to failure a safeguard site is $4,800. Hopefully, this new stricter enforcement will help ensure cranes aren't used in unsafe situations where workers or others could be at risk.