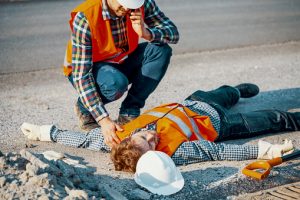 Putting on safety gear can be time consuming for some workers in high-risk professions. As a result, questions have arisen regarding whether employees should be paid for the time spent putting on their gear.

The answer to this question would have important implications for work safety. If it was determined putting on safety gear wasn't something workers could be paid for, this could encourage cutting corners. The risk of workplace accidents and resulting workers' compensation claims could thus be increased. On the other hand, if putting on safety gear is considered an essential part of the job-- and one workers get paid for doing-- not only is the incentive to cut corners removed but the importance of donning safety gear is underscored.

Fortunately, the U.S. Supreme Court recently ruled in favor of the workers in a case against Tyson Food's pork processing plant. The workers were awarded $2.9 million in overtime pay for the time they spent putting on safety gear, which Safety News Alert reports was "integral and indispensable to their hazardous work."

The Tyson employees who brought the initial case worked in a plant where killing, cutting, and re-trimming took place. The specific safety equipment which each worker wore was based on the duties performed in the plant. Some of the employees were paid for putting their gear on and taking it off, but many were not. Further, the amount of time the workers actually spent taking the gear off and on was not recorded.

The employees argued they should have been paid for their time and they brought a wage-and-hour claim. They sought $2.9 million in overtime pay for the uncompensated time they had spent putting on safety gear. They also sought to have their wage and hour claim certified as a class action. A district court ruled in their favor, indicating a class action was an appropriate method of resolving the case even though not all of the workers wore the exact same safety equipment.

The court ruled the employees were entitled to overtime pay. Because no records were kept regarding the amount of time the workers spent putting on safety gear, the employees asked an industrial relation's expert to conduct calculations to determine how much time on average they spent dressing in appropriate gear. After videotaping the workers putting on and removing their safety equipment, the expert determine the cut and re-trim department workers spend 18 minutes per day on average to put on safety gear and those in the kill department spent 21.25 minutes. Tyson argued the calculations were improper, but the district court and Eighth Circuit disagreed.

The case was appealed to the Supreme Court, and in a 6-3 decision, the court upheld the ruling awarding the workers $2.9 million. The decision was an important one because it affirms putting on safety equipment is an important and essential part of the job for which workers deserve payment.