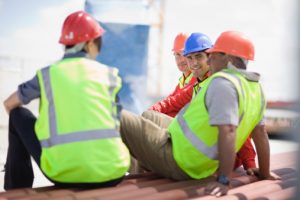 Workers who cut corners put others as risk

The training typically costs anywhere from $140 to $300. However, some workers have found a way to bypass the course by purchasing fake cards indicating that they had graduated from the program. An undercover investigation conducted by NBC 4' New York I-Team and Telemundo 47 Investiga revealed the shocking details of this black market commodity. For only $60, construction workers have been able to purchase a card with indistinguishable features from the authentic OSHA safety training card.

Construction site deaths linked to fake safety training cards recently caught the attention of Mark Peters, commissioner of the New York City Department of Investigation (DOI). In a statement, Peters said, "The fatalities were related to things that you would know to be careful of if you had proper safety training."

Some workers cited loss of work time and pay as the primary reason for purchasing the fake cards. But in conjunction with the Manhattan Construction Task Force, the DOI and Manhattan district attorney's office are urging workers to trade in their counterfeit cards for a waiver on the cost of the course. Peters stated, "We'll give you the 10 hours of training. We'll give it to you for free, and then you can have a legitimate card."

The risks outweigh the benefits

Pasternack Tilker Ziegler Walsh Stanton & Romano LLP can help injured workers and their families. We proudly serve New York and will stop at nothing in the pursuit of justice. Call 866-840-6709 or visit us online and complete the free case consultation form.