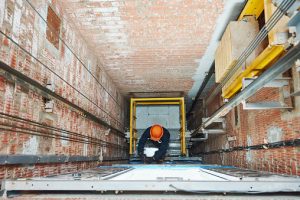 A fatal accident involving a construction worker who fell nearly 100 feet down an elevator shaft is under investigation, according to a New York Daily News article.

The Brooklyn man, who worked for U-Tek Elevator, died after plunging nine stories at a construction site in Gramercy Park. He was working with a crew installing an elevator car at a new hotel project.

According to the article, the New York City Department of Buildings inspectors issued a stop work order at the site.

The Daily News reports that the construction site had a history of 17 complaints in the past year. In addition, the man who tumbled down the shaft was not tethered to a safety line.

The deaths of construction workers have been a growing problem in New York City over the past few years. The Department of Buildings reports that 12 workers died each year between 2015 and 2017. The January 23 accident was the first construction worker death of 2018.

According to the New York Committee for Occupational Safety and Health, construction deaths statewide hit an all-time high in 2016. During that year, 71 workers died in construction-related accidents, an increase from 55 deaths in 2015.

Unfortunately, many companies continue to ignore regulations such as keeping floors clear to prevent slip, trip and fall accidents. They often fail to follow OSHA guidelines such as providing safety equipment and training for workers.

In the case of the Gramercy Park tragedy, the Daily News reported that the one complaint indicated that unsecured debris was seen falling off the building in March 2017. A month later, another complaint identified a failure to wear safety equipment by workers.

The president of the Building and Construction Trades Council called the trend of construction worker deaths an "out of control epidemic," according to the Daily News. The organization is pressing the City to convene the Construction Safety Task Force, which was part of legislation passed in the City Council last year.

When workers are injured on the job, they generally are entitled to workers' compensation regardless of fault. If a worker dies, the family may be entitled to death benefits.

As experienced attorneys who have represented families who lost loved ones in accidents, we know how critical it is to hold the industry accountable. We don't want to see another New York family have to go through the grieving process because their loved one died simply while doing his or her job.

That's why it's important to contact us if you lose a loved one in a construction accident. An attorney can help you file for workers' compensation and investigate the incident to determine if a third-party liability lawsuit is necessary. If some entity other than the victim's employer is found responsible, we may be able to assist with a personal injury claim. Strong legal action is often the best way to hold companies accountable.

For more information, contact Pasternack Tilker Ziegler Walsh Stanton & Romano, LLP. We serve New Yorkers who have been hurt on the job and families who have lost loved ones in work accidents.