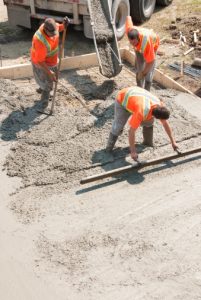 You see it everywhere in New York City - buildings and structures built with cement. However, handling cement can be a dangerous job many construction workers face on a daily basis.

That's because cement includes harmful compounds such as hexavalent chromium, as well as sodium and potassium oxides. When workers come in contact with these materials, they can cause serious short-term and long-term injuries.

According to the Occupational Safety & Health Administration (OSHA), direct contact with cement can cause chemical burns on the skin. Skin problems can range in severity. Workers may experience:

Cement can also seep through clothing, gloves, or boots causing burns that a worker may not be immediately aware of. That's because cement burns don't cause any immediate pain or discomfort. However, the longer a worker is exposed to cement, the more damage can be done.

Severe burns can extend beyond the surface of the skin and affect underlying connective tissue. Additionally, when workers wash cement off their skin, the alkaline compounds can continue to burn before getting better.

Workers who are chronically exposed to cement may develop dermatitis, which is caused by sensitization. When the immune system detects contact with the harmful compounds found in cement, even in small amounts, it overreacts and results in severe inflammation. Symptoms often include rashes and severe itching.

According to a case report by Lung India, published in the US National Library of Medicine, National Institute of Health, exposure to cement dust over a lengthy period of time can cause respiratory illnesses such as chronic obstructive lung disease. Those affected may experience shortness of breath, wheezing, chest pain, chronic coughing, and excessive mucus. Chronic obstructive lung disease caused by exposure to cement dust can eventually affect the heart, liver, spleen, and other internal organs.

Silicosis is another common illness that can be caused by exposure to cement dust, according to OSHA. Silicosis and chronic obstructive lung disease share many of the same symptoms. However, Silicosis can lead to:

If you have sustained a burn or respiratory problem caused by the exposure to harmful materials at work, you may be eligible for workers' compensation. At Pasternack Tilker Ziegler Walsh Stanton & Romano LLP Attorneys At Law, we handle workers' compensation claims in New York involving cement burns and long-term workplace illnesses.

We have over 80 years of experience representing injured workers throughout New York City. Contact our law office today to discuss your options.