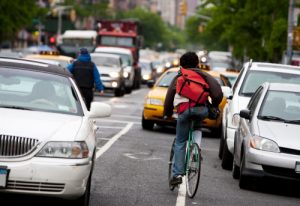 A New York Times story details the dangerous conditions and struggles facing workers who use bicycles to deliver food in New York City.

Many of the cyclists are undocumented immigrants, which means they often are afraid to take action if injured on the job. The Times interviewed several deliverymen who described difficult working conditions. Without question, they have thankless and dangerous jobs.

"I've seen too many accidents, and each time I think, 'This could have been me'," one worker said. He recalled an accident in which he was knocked off his bike after a driver opened a door. The driver left the scene without even asking the deliveryman if he was OK.

Edwin Vicente Ajacalon came to New York City from Guatemala when he was 14. He didn't finish school. Instead, he took a job as a bicycle deliveryman. In November 2017, he was killed after being struck by a car in Brooklyn's South Slope neighborhood. The driver was cited for speeding but did not face criminal charges. Other deliverymen interviewed by the Times said they deeply felt Edwin's loss and recognized it could have just as easily happened to them.

According to the New York City Department of Transportation's bicycle crash data report, 24 cyclists were killed and 4,397 were injured in accidents involving motor vehicles in 2017. (The report includes all cyclists, not just people making deliveries.) In early August, a tourist from Australia became the ninth cyclist to die in 2018 after he was struck by a garbage truck on Central Park West.

The Times spoke with deliverymen in New York City who came here to seek a better life. Working for restaurants, they make meager wages and say they often receive a small tip or no tip at all. That's one of the reasons why an accident can have a devastating impact, even if the injury is minor. A cyclist who makes deliveries for a living can quickly run out of money if sidelined by an injury.

If injured or killed, the worker or his or her family can seek a settlement through the employer's workers' compensation insurance, regardless of immigration status. In accidents caused by a careless driver, the cyclist can file a personal injury lawsuit. But as the Times report reveals, many undocumented deliverymen are too frightened to take action. They fear the attention could result in deportation.

Injured cyclists may be entitled to collect workers' compensation

While delivery workers have options, they still face some of the most dangerous working conditions in New York City. Construction workers have more legal protections than delivery workers. The Times reports that owners of construction sites are required by law to provide a safe work environment. There are no such legal requirements for a restaurant's landlord.

As experienced workers' compensation attorneys in New York City, we have handled a range of cases involving workers injured in all types of fields. If you or a loved one was injured or killed in an accident, you don't have to feel isolated and alone.

Contact Pasternack Tilker Ziegler Walsh Stanton & Romano, LLP for a free consultation. We can help you explore your legal options. An injury shouldn't destroy your dream of making a better life in New York City. Reach out to us today to learn more.