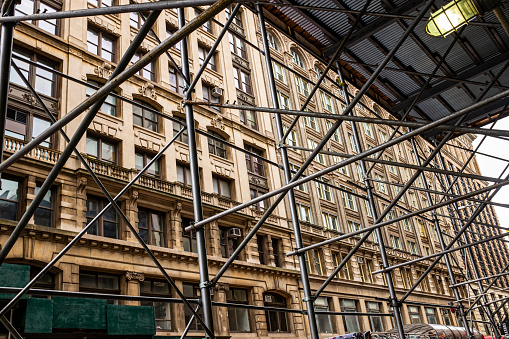 Some companies want New York to eliminate Section 240 of New York State Labor Law, often referred to as the New York Scaffold Law, which is designed to protect construction workers from being injured in construction accidents while working on scaffolding.

The law also requires companies to provide workers working on scaffolding or other elevated surfaces with protective safety equipment and proper safety training. This includes all "elevation-related hazards" in which gravity poses a danger, including work that requires employees to work on roofs, balconies, rafters, window ledges, cranes, stairs, and suspended platforms.

How common are scaffolding accidents?

Every year, about 64 people die in New York construction accidents, according to statistics compiled by the U.S. Bureau of Labor Statistics (BLS) over the last five years. Of those deaths, 35 percent (23 fatalities) occur on construction sites in New York City each year.

Why do scaffolding accidents happen?

Scaffolding accidents happen for many different reasons. In many cases, injuries and fatalities occur on scaffolding in New York due to hazardous conditions. Often, such conditions exist because construction companies didn’t take the necessary safety precautions or failed to provide proper safety equipment or training to employees who work on scaffolding. Specific examples include:

But it’s important to keep in mind that OSHA simply focuses on finding out why scaffolding accidents happen, not whether you’re fairly compensated for your injury-related expenses. That’s why you should talk to an attorney right away who can gather evidence in support of your claim and demand the money you deserve.

Who pays for scaffolding injury claims?

How your accident happened and who was at fault can play a large role in where you will seek financial compensation for your injury-related expenses, which often includes the cost of your medical care and the loss of income you may experience due to not being able to work as a result of your injury.

In many cases, you will file a workers’ compensation claim with your employer if you got hurt while working on scaffolding. However, there are situations where you might need to seek financial compensation from another source.

When in doubt, always talk to a lawyer familiar with handling complex construction accident claims. An experienced attorney can advise you on the best course of action and help you pursue the compensation you deserve.

Can I file a lawsuit after a scaffolding accident?

In certain circumstances, filing a lawsuit may be the best way to get the money you deserve for all your scaffolding accident-related expenses. This is especially true if your workers’ compensation claim is denied or your third-party claim is rejected.

Keep in mind that in most cases you generally only have three years from the date of your scaffolding injury in New York to file a lawsuit or take other legal action. This deadline is known as the statute of limitations. Three years might seem like a long time. But the longer you wait to take legal action, the harder it can often be to find the evidence you need in support of your claim.

It’s also important to realize that many legal battles involving scaffolding injury claims can quickly become very combative. That’s because there’s often a lot of money stake. Instead of paying you the money you deserve, some construction companies and insurance providers would rather fight your claim in court. That’s why you need an experienced attorney on your side.

How a construction accident lawyer can help

When you have a lawyer representing you after a construction accident, you can focus your energy on getting better while your attorney fights for your best interests. Instead of construction companies, insurance providers, and their attorneys telling you what's best for you, you can make sure your voice is heard loud and clear at the negotiating table or in the courtroom.

At Pasternack Tilker Ziegler Walsh Stanton & Romano, LLP, our attorneys know how to handle scaffolding accident claims. We know how to review and analyze OSHA accident reports, inspection reports, and other important documents. We also regularly conduct our own in-depth, independent investigation to determine exactly what happened and then build a strong case built on the facts.

Many insurance companies agree to cooperate and negotiate in good faith with us once they see we’re serious about your case. If they refuse to make a fair settlement offer or act in bad faith, we have the option to file a lawsuit and take legal action. We’re serious about winning your case and getting you the money you deserve.

Discover what our law firm can do for you and contact us today to schedule an appointment with an experienced New York construction accident attorney who knows how to build strong legal cases. We have 12 offices conveniently located throughout New York, including five offices in New York City.