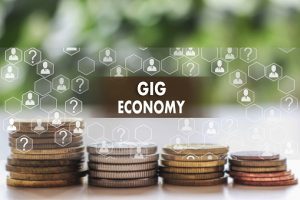 Have you ever seen a job ad asking if you’d like to be your own boss? Have you ever thought about the convenience and flexibility of earning a living outside of the 40-hour-per-week, 9-5 norm? If so, you’re not alone.

Today’s emerging tech companies (such as Amazon, Uber, and Lyft) are seeking freelancers, independent contractors, and other non-employee workers. This type of labor market, dubbed the “gig economy” has become more prevalent in recent years, especially among young workers.

This flexibility and non-traditional work setting come with a great cost that outweighs the benefit of “being your own boss.”

How prevalent are job misclassifications?

According to Vox, two companies, Epicurious and Medium, recently posted job opportunities for “full-time freelance” positions – one of which was described as “being paid hourly for 40 hours a week with zero benefits.” Both postings, which spurred outrage on social media, were reported to the New York Department of Labor.

It’s critical to understand that there is no contrast between independent contractors and freelancers – they are both the same thing. While both are required to fulfill the duties set forth by the company, they are not paid hourly, nor are they required to work under supervision for 40 hours per week.

In the case of the Epicurious posting, the position was misclassified. Anyone who works a standard schedule under direct supervision is considered an employee and is entitled to employee protections, such as workers’ compensation.

Companies often seek out independent contractors for the exemptions they provide. This often includes being exempt from paying for social security, Medicare, unemployment benefits, health insurance, and workers’ compensation benefits. In many cases, workers are entitled to employee status, yet get misclassified as “independent contractors.”

Actions you can take

If you have reason to believe that you have been misclassified it’s important that you act fast. If you’re required to work employee hours and fulfill employee duties under supervision, then the company is required to offer workers’ compensation coverage.

Should you be hurt on the job under these circumstances, it’s critical that you seek the legal counsel of an experienced attorney. Contact Pasternack Tilker Ziegler Walsh Stanton & Romano LLP Attorneys At Law today to learn more.