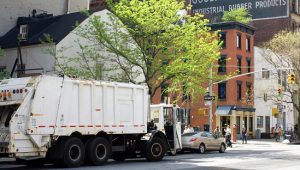 A driver for a private trash hauler and his assistant told investigators a man who died after being struck by the truck was unknown to them.

The driver and helper claimed a stranger jumped on a running board of his truck, lost his grip, fell and was run over by the truck. The fatal crash happened Nov. 7, 2017.

Two months later, it became clear that the men lied, according to a ProPublica article. The man who died was Mouctar Diallo, an immigrant who worked for Sanitation Salvage, the company Sean Spence drove for.

Spence continued driving for Sanitation Salvage, even after the lie was exposed. In April, the driver was involved in another fatal accident. Leon Clark, a pedestrian in his 70s, was run over by a truck driven by Spence. After Clark's death, Sanitation Salvage suspended him.

The New York City Business Integrity Commission investigated the Bronx trash hauler in the aftermath of Diallo and Clark's deaths. Diallo, the man who died, was one of the additional helpers who is known as "third men." In August, a full four months after the second fatality, the BIC stated that Spence was no longer allowed to work in the sanitation industry, according to ProPublica.

The New York Post reported on Aug. 24 that the city had suspended Sanitation Salvage's license. Elected officials and worker advocates for months had been calling for such action. According to the article, the BIC concluded that the trash hauler exhibited "a pattern of unsafe operation ... that creates an imminent danger to life and property."

Sanitation Salvage failed federal safety inspections at a higher than average rate. According to a Department of Labor Investigation, the company failed to pay hundreds of thousands of dollars in wages. Workers often were putting in 18-hour shifts. To complete their routes on time, drivers often hired men on the street to help, according to ProPublica.

While Sanitation Salvage's record is particularly disturbing, it is far from unique. According to ProPublica, waste and recycling work ranks as the fifth-most dangerous job in the United States. Since 2010, 33 deaths have been linked to private trash haulers in New York City.

In a New York Daily News report, Sean Campbell, president of Teamsters Local 813, said, "Private sanitation companies in this city treat workers like trash and Sanitation Salvage is one of the worst. .... A young man died on the job, people lied about it, and no one is being held accountable."

Sanitation workers should not have to risk their lives when trying to earn a living. If an accident does happen, the victim deserves justice. If you or a loved one was injured on the job, you will need an experienced attorney by your side. A workers' compensation attorney can help.

Contact Pasternack Tilker Ziegler Walsh Stanton & Romano, LLP for a free consultation. With hundreds of years of combined experience, we work aggressively on behalf of clients.