NYC Food Delivery Workers Are at Risk of Injury & Death 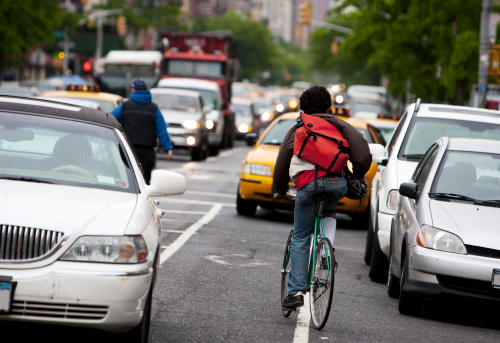 A New York workers’ comp lawyer explains what to know

Five food delivery workers have died on the job in the past year in Brooklyn, New York, according to a recent study conducted by the delivery workers collective Los Deliveristas Unidos and published by Brooklyn Paper.

Along with the five fatalities, the study found that 49 percent of food delivery workers had been involved in a collision while on the job. Other findings from the study include:

How common are delivery worker injuries?

Even before last year, injury accidents involving delivery drivers were a serious problem. Fatal injuries nationwide among delivery drivers reached a five-year high in 2019, according to the U.S. Bureau of Labor Statistics (BLS). That year, 83 delivery drivers nationwide died on the job. A majority of fatalities (60 deaths or 72 percent) involved transportation-related accidents. However, 16 percent of the deaths (14 total) involved workers being intentionally injured.

Non-fatal injuries involving delivery workers also skyrocketed in 2019. According to the BLS, more than 8,200 workers nationwide sustained injuries on the job, making that year the most dangerous year for delivery workers in the past five years.

How do delivery worker accidents happen?

These are just some of the most common causes of injuries involving food delivery workers. Accidents regularly happen for other reasons. And in each case, each injury should be carefully investigated to determine why the accident happened and who’s responsible for compensating the injured delivery worker.

In the past, many food delivery workers worked directly for the restaurant they delivered food for in New York. In such situations, injured workers are almost always eligible to receive workers’ compensation, which provides money for medical care and lost wages.

But that situation has changed dramatically in recent years due to food delivery apps like DoorDash, Uber Eats, and Grubhub. As a result, most food delivery workers are now independent contractors who deliver food on behalf of these large corporations. This is an important distinction since many independent contractors are not eligible for workers’ compensation if they get hurt on the job.

But injured food delivery workers may have other ways to get the money they deserve for medical bills and other injury-related expenses. Depending on which company the injured delivery worker works for, they might be covered by the company’s insurance policy, especially when it comes to emergency medical care costs.

This is why it’s important to talk with a New York attorney as soon as possible if you or a loved one was injured while working as a food delivery driver in Manhattan, Brooklyn, Queens, or another borough in New York. You may be eligible for financial compensation for your work-related injury.

Can injured delivery workers or family members file a lawsuit?

Depending on your work status as a food delivery worker, you may be able to file a lawsuit seeking damages, a legal term used to describe financial compensation for injury-related expenses. This is especially true for independent contractors who work for food delivery app companies such as DoorDash, Uber Eats, and Grubhub. You can file a lawsuit against them, especially if the company forced you to engage in dangerous activities or hazardous situations, such as texting directions while you were driving or delivering food.

Injured delivery drivers or their families can also file a lawsuit if the person was injured in an accident caused by another driver. In such situations, injury victims or family members often file a lawsuit against the at-fault party’s insurance company. This is especially true if the at-fault party (in this case, another driver) was under the influence of alcohol, ran a red light, was speeding, or engaging in other illegal behavior that resulted in an accident.

You might think you don’t need an attorney if you are eligible for workers’ compensation benefits or other compensation in the form of a civil lawsuit. But the reality is a lot of legal claims involving injured food delivery workers turn into complicated legal cases.

Food delivery app companies often do everything they can to avoid paying injured delivery drivers the money they rightfully deserve. Insurance companies for the at-fault party often do the same.

This is why you should have an attorney on your side who will stand up for your rights. At Pasternack Tilker Ziegler Walsh Stanton & Romano, LLP, our attorneys have decades of experience handling complicated legal cases. We understand how the system works in New York and the state and federal laws that often apply to workplace injury claims. That’s why we have such a strong track record of success in securing workers’ comp benefits and other financial compensation for injured workers.

Learn more about how we can help you with your injury claim. Contact us today to schedule an appointment with an experienced New York workers’ compensation attorney who puts your best interests first. We have 12 offices conveniently located throughout New York, including five offices in New York City.