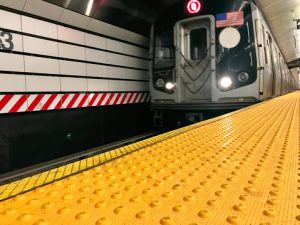 During a recent rally, New York City subway workers carried signs with messages such as "An Injury to One is an Injury to All! Transit Workers Deserve Safety & Respect."

Transit workers organized the rally to raise awareness about assaults in their workplace. The workers carried signs from the Transport Workers Union Local 100 office in Brooklyn to the Metropolitan Transportation Authority (MTA) headquarters in Manhattan, according to a report in the New York Daily News.

A train operator recalled an incident a few years ago when a rider tossed a beer can at him while he was cleaning one of the cars, according to the Daily News. It wasn't an isolated incident. Two other workers faced a similar threat the same night, the operator told the newspaper.

Another transit employee recalled one incident in which someone kicked her while on the job.

Violence in subway system has been trending upward

The threats to MTA workers come at a time when violence on subways is on the rise, according to an article in the New York Post.

Citing data from the New York Police Department, the Post reported a 16 percent increase in felony assaults in the subway system in February 2017 compared with the rate in February 2016.

Assaults on subways rose by 44 percent between January and March 2016 compared to the same time period in 2015.

"You pay your subway fare to ... get to work, not to see fighting," one rider from Brooklyn told the Post. "It's devastating."

An MTA worker told the Daily News that more people should be aware of the problem of violence on subways that affects riders and workers.

Among the changes MTA workers are seeking: a larger police presence on subways and more awareness about laws against harming subway employees.

As experienced workers' compensation attorneys, we have represented New York City workers who have been injured on the job, including those who were harmed through violence. No transit employee should have to worry about being assaulted while at work. Employees have the right to work in a safe environment.

We applaud the workers who marched across the Brooklyn Bridge to raise awareness about assaults in the subway system. As one of the employees said, "Without us, the city don't move."

It's critical for the City of New York to keep the safety of subway workers and riders a top priority and take action to reduce the number of violent incidents.

If you or a loved one was injured while working in the subway system, you will need a strong advocate to ensure your rights are protected.

Contact Pasternack Tilker Ziegler Walsh Stanton & Romano, LLP for a free consultation. With hundreds of years of combined experience, we can help you pursue the compensation and benefits you deserve.