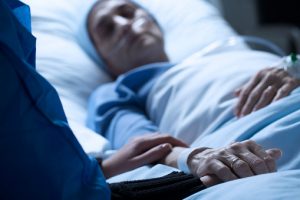 Under the current rules for the Social Security disability system, there is a five-month waiting period before SSDI benefits begin.  This means that you cannot receive income from the Social Security Administration during the first five-months after you have been diagnosed with a disabling condition that prevents you from working.

A Social Security Disability lawyer in New York can help individuals to prepare their SSDI benefits application, to get all of their medical evidence in line and to get their application submitted on time so they can get the benefits as quickly as possible after the waiting period has ended. However, for the terminally ill who have little time left to live, this five-month waiting period often results in the sick patient getting no benefits at all.  A new bill before the United States Congress aims to change that.

SSDI is a program supported by deductions from payroll, so every worker who qualifies has paid for coverage from this disability benefits program. Unfortunately, by imposing a five-month waiting period, those who have terminal illnesses and less than five months to live will often be deprived of disability benefits from a system they've paid into, and they may die before the waiting period has ended or may be very close to the end of their lives after five months have passed.

While the SSA indicates the five-month waiting period "ensures that during the early months of disability, we do not pay benefits to persons who do not have long-term disabilities," this reasoning is not applicable to the terminally ill. Those with terminal illnesses are, by definition, not ever going to get better. Since they have paid into the SSDI system and they typically qualify for benefits, there seems to be little justification for depriving them of what may be a much-needed source of income during the waning months of their lives.

To correct this issue, Senator John Barrasso has sponsored S. 1311: Expedited Disability Insurance Payments for Terminally Ill Individuals Act of 2013.  Under the provisions of the act, individuals who have a medical condition resulting in a life expectancy of six months or less will receive:

The law also makes provisions for what will occur if the terminally ill patient beats the odds and manages to live longer than expected. If the individual lives for longer than a year, a portion of the benefits paid during what would have been the five-month waiting period will be deducted from the payments the individual receives in the subsequent months.   The law also ensures that only the truly eligible are able to receive these expedited benefits by requiring two separate doctors in different physician groups or practices to certify that the illness is terminal.

Will the law is currently before committee, if it passes, it will make it much easier for those individuals with a terminal illness to get benefits they both need and deserve.