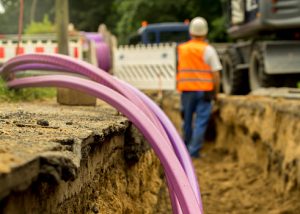 In mid-June a construction worker in Queens fell into a 25-foot hole and became trapped at the bottom of a ditch. The man had been engaged in excavation work when he fell into the ditch and was buried under hundreds of pounds of mud. Rescue workers had a difficult time extracting the man as every time they tried to pull him out, he began to slide deeper into the hole.

Our New York City construction accident attorneys know that excavation work can be dangerous and that crushing injuries can result when construction workers become trapped in ditches or under dirt. In this case, the man who fell into the ditch was lucky that he was able to survive the incident, as not all workers come out of such accidents alive. The tragedy averted in this instance is a very important reminder of the importance of following all safety rules and precautions for any construction projects.

A worker was in the bottom of the ditch that had been dug when a collapse occurred and the man became trapped. The brother of the victim indicated that he had been working and attempted to release a chain but had gotten buried up to his chest in dirt.

Rescuers got the call that the worker was pinned under the dirt and came to provide aid and help to extract the victim. Initial responders worked almost upside down to begin digging the man out, but digging is a very slow process so rescue workers were able to call in equipment to suck out the dirt. The vactor trucks can remove as much as a foot of dirt every five minutes and the use of these trucks to clear the ditch likely helped to save the life of the worker who had been buried.

After the worker had been freed, he was surprised at the massive media attention that greeted him in the wake of the close call he had sustained. Rescue medics treated him for injuries with IV and pain medication. The goal was to attempt to fight the chemical buildup in his muscles that occurred from him being submerged. This chemical build-up has the potential to cause heart damage even hours after the worker is extracted from the ditch where he was trapped.

A stop-work order was issued on the site because of the improper shoring and because the work was not permitted. Clearly, the circumstances in the home and on the project were unsafe for the workers involved, which is why this incident occurred.

Those who perform excavation work must have proper permits and follow all OSHA safety requirements in order to avoid serious workplace injury. Employees who are harmed in excavating accidents can take action through workers' compensation claims and a third party lawsuit may also be possible against the homeowners who were having the unpermitted work performed on their home.