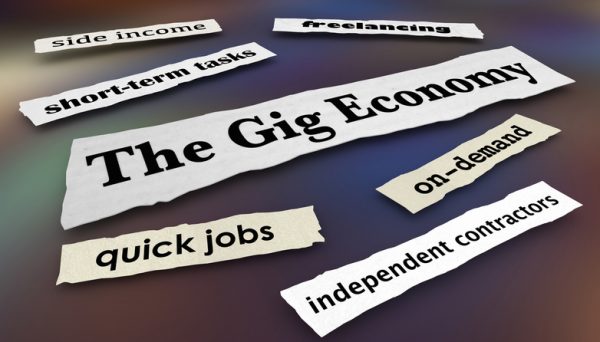 The emerging gig economy has ushered in a new class of workers who don't follow the conventional shift schedules that employees have for decades. They're called independent contractors, freelancers, or gig workers. They are currently not considered employees of the companies they work for.

While some people prefer the flexibility afforded by the gig economy, it comes with a cost. Many gig workers are lured into independent contractor positions with no safeguards by common slogans such as "Be your own boss." In reality, gig workers don't have access to unemployment insurance, workers' compensation, overtime, minimum wage, sick leave, vacations, or any other benefits that many full-time employees have access to.

That means when gig workers sustain job-related injuries, they are forced to pay for their own medical expenses and aren't compensated for their time away from work. New York lawmakers, however, are looking to change that, according to Bloomberg Law.

Legislation (S.6538/A.8343) dubbed the "Dependent Worker Act" was introduced by Senator Diane Savino (D) and Assemblyman Marcos Crespo (D) in June of 2019. The bill is intended to define anyone who works for someone else, offers their time and labor, and offers personal services in exchange for compensation as a "dependent worker."

It seeks to grant dependent workers the right to unionize. It also directs the state labor department to study the impact of extending protections to gig workers.

Savino also plans to introduce future legislation to extend the protections and benefits afforded to employees to dependent workers. The new legislation will be considered for the upcoming 2020 session, starting in January. It will be based around the multifaceted Senate technology hearing that occurred on October 16.

In addition, advocates are urging lawmakers to introduce legislation similar to California's AB5, which was recently signed into law by Governor Gavin Newsom and goes into effect on January 1st, 2020. Opponents of AB5 claim that the bill will have a negative effect on businesses. They said it will increase their taxes and expenses.

"I think in my opinion, forget the specifics, more people should be considered employees because what has been happening is companies have been going out of their way to hire independent contractors to get out of those obligations.”

What protections do some gig workers currently have?

The legal team at Pasternack Tilker Ziegler Walsh Stanton & Romano LLP Attorneys At Law will be closely watching these developments and hope to see changes in the coming new year. If you were hurt on the job under any circumstance or believe you were misclassified as an independent contractor, we urge you to speak to one of our experienced workers' compensation attorneys as soon as possible.

Our law office is based in New York City and we represent clients across the state of New York. If you have any questions or are in need of legal help, contact us online.